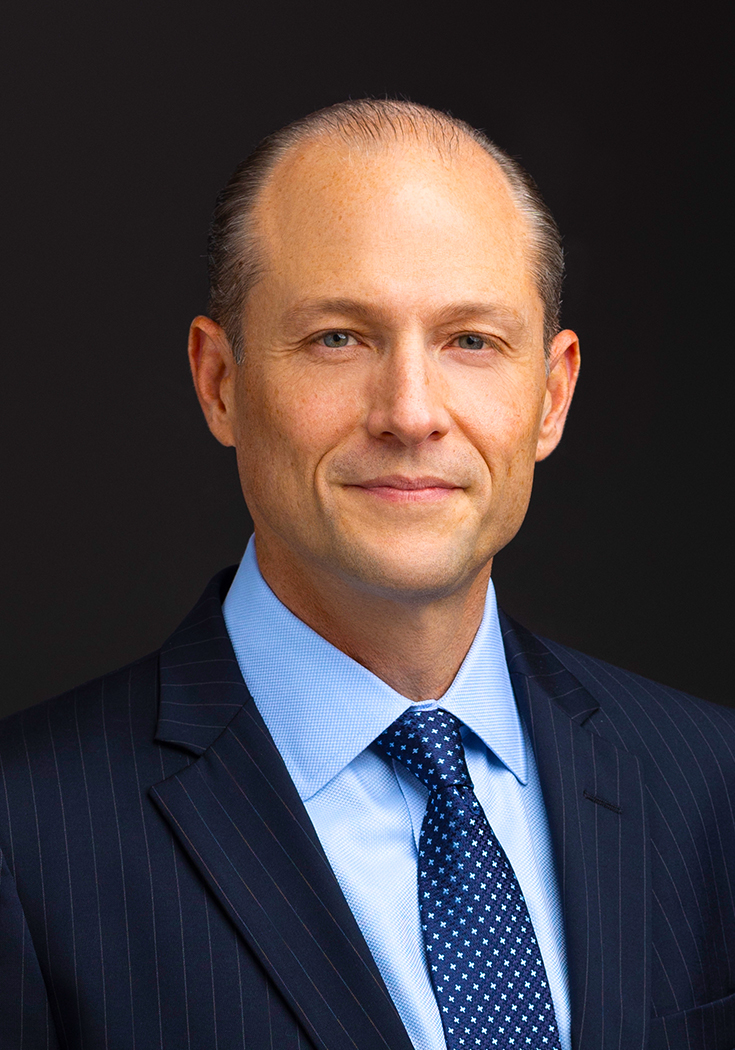 David is a shareholder of Collins Einhorn Farrell PC, and has over 20 years of litigation experience. He has successfully defended a wide variety of professional liability claims, ranging from legal malpractice to claims against accountants, insurance agents, architects and engineers, real estate/title agents and even fine art appraisers. He has also successfully defended numerous corporations against product liability claims, including death cases. Over those years, David has gained considerable jury trial and arbitration experience.

David donates his time and energy to charity work on a regular basis. He has raised funds for the Lance Armstrong Foundation, the Women’s Survival Center, The Boys & Girls Club of Oakland County, The United Way, Lighthouse, and The Child Abuse & Neglect Council/CARE House, among other charities. He has run two marathons in order to raise funds to benefit The Leukemia & Lymphoma Society.

Obtained summary disposition/judgment on behalf of numerous and varied professionals

Moderated a panel presentation entitled, “Modern Trends in the Business of Law” at the International Association of Defense Counsel’s Professional Liability Roundtable in Chicago. (August 2021)

Moderated an International Association of Defense Trial Counsel (IADC) webinar entitled “Case Within a Case: Defense of a Legal Malpractice Case Via Trial of the Underlying Action (August, 2020)

Presented at Lloyd’s of London on a product liability panel entitled: You Can’t Get There From Here: Autonomous Vehicles and Drones Won’t Be Delivering Your Cannabis Anytime Soon, but All Three Present Developing Challenges for Insurers and Claims Professionals. (November 2019)

Appeared on Practical Law, a television show hosted by attorney Henry Gornbein, on behalf of the Oakland County Bar Association.

Presented at the American Conference Institute’s Advanced Forum on LPL/Legal Malpractice Conference in New York in a session entitled: Trying a Case and Strategies for Handling Legal Malpractice Cases: Emerging Trial Issues, New Defenses and Novel Ideas, and a Brief Examination of Circumstances under which It Can Be Appropriate to Admit Negligence. (October 2016)

David spoke at the International Association of Defense Counsel’s (IADC) Professional Liability Roundtable at NYU Law School in New York City. David’s topic was “When the Tripartite Relationship is Challenged by Coverage Issues.” (May 2013)

David co-hosted the Oakland County Bar Association’s Bench-Bar Conference. The focus of the conference was social media as it relates to privacy issues in the practice of law. (March 2011)

David spoke at the State Bar of Michigan’s Annual Meeting. David’s topic was “Strategies and Pitfalls Associated with Notices of Fault.” (September 2009)

Swinging for the Fences: Best Practices for Keeping Your Eye on the Ball, Professional Liability Defense Quarterly, Vol. 5 Issue 4 (Fall 2013)

We Don’t Do Windows: Excluding Collateral Matters from the Scope of Representation, DRI For the Defense, p 80 (March 2007)

The Road to a More Rewarding Practice, Laches (September 2002)

The results are in, and CEF’s own David C. Anderson has been re-appointed Chair of the International Association of Defense Counsel’s (IADC) Professional Liability Committee for 2021-2022. Congratulations, and here’s to another successful year. For more information on the IADC Click Here

Collins Einhorn Farrell PC is proud to announce that 13 of its attorneys have been named Michigan Leading Lawyers, including one attorney receiving the distinction of 2020 Top 10 Leading Women Business Lawyers. Leading Lawyers recognitions are peer-recommended through survey and approved by an advisory board. The organization limits the total number of Leading Lawyers…

Collins Einhorn Farrell PC is proud to announce that David C. Anderson, Theresa M. Asoklis, Brian D. Einhorn, Deborah A. Hebert, and Neil W. MacCallum have been named 2021 Best Lawyers® “Lawyer of the Year” in the Detroit Area in their respective practice areas. Only a single lawyer in each practice area within a designated…

Happy New Year!  As you contemplate the year ahead and assess your professional goals for 2020, here are seven New Year’s resolutions to consider. Navigate social media with style Engagement agreements should be reviewed and reevaluated Work out your succession plan Your mental and physical health are paramount Educate yourself to maintain technological competency Assess…

Malpractice defendants often find themselves with a lot of company. When a transaction seems to go awry, aggrieved plaintiffs may sue every professional involved—accountants, lawyers, consultants, and their respective firms. With multiple defendants, there’s a possibility that the court will issue multiple orders resolving the plaintiff’s claims. For example, the court might grant summary disposition…

A lawyer’s retention agreement has two general purposes.  It memorializes what the lawyer has advised the client regarding the objectives of the representation, the way those objectives will be pursued, and the anticipated costs.  But it also protects the lawyer against potential malpractice claims.  A carefully-drafted agreement can be a lethal arrow in a lawyer’s…

Attorneys David Anderson, Trent Collier, and Fawzeih Daher obtained dismissal of an appeal for lack of jurisdiction on behalf of our client (a national financial services firm) and 12 other defendants in a case involving allegations of improper accounting. The plaintiff filed suit against 13 defendants in the Probate Court. One by one, the Probate…

Attorneys David Anderson and Trent Collier obtained summary disposition on behalf of a wholesale surplus lines insurance broker in Oakland County Circuit Court. Plaintiff claimed that the broker negligently failed to procure a commercial auto insurance policy for him after the insurer denied coverage. In its 14-page opinion, the Court found that Anderson and Collier…

David Anderson and Trent Collier successfully defended a supplier in a multi-million-dollar lawsuit under the Uniform Commercial Code. The plaintiff sold tarpaulins for semi-trucks and used the supplier’s laminate to coat the tarpaulins. The plaintiff claimed that the laminate didn’t work and sought millions of dollars in damages. David and Trent obtained an order granting…

We are pleased to announce that our partner David C. Anderson has been elected to the board of commissioners of the State Bar of Michigan. The State Bar Board of Commissioners provides oversight to the various operations of the State Bar, such as finance, public policy, professional standards, and member services and communications. Anderson will represent District I (Oakland County), serving for a three-year term expiring at the close of the 2020 Annual Meeting. Click on the headline to read the full submission.

Attorney David C. Anderson will be speaking on October 24, 2016 at the American Conference Institute (ACI)’s Advanced Forum on LPL/Legal Malpractice. The title of the discussion is called “Trying a Case and Strategies for Handling Legal Malpractice Cases: Emerging Trial Issues, New Defenses and Novel Ideas, and a Brief Examination of Circumstances under which It Can Be Appropriate to Admit Negligence?”

On Thursday, June 2, 2016, CEF attorney David C. Anderson was sworn in as the 84th President of the Oakland County Bar Association. We are very proud to be associated with such a fine leader in the legal community, and we look forward to sharing his future accomplishments with all of you. Congratulations, David.

Collins Einhorn Farrell PC is pleased to announce that partner David C. Anderson has been named a 2016 Leader in the Law by Michigan Lawyers Weekly. Anderson, selected for his dedication, leadership, and going above and beyond the call in support of his clients and his firm, is one of 30 distinguished lawyers who were…

Hall v Lawyer-Client – On November, 16, 2015, David C. Anderson obtained a “no cause for action” jury verdict in favor of his lawyer-client who was sued in Oakland County Circuit Court for alleged legal malpractice and fraud. Plaintiff’s attorney asked the jury to award more than $600,000 in damages due to the lawyer’s alleged…

﻿David C. Anderson and Trent B. Collier successfully defended a Texas insurance agency, obtaining a published opinion from the Sixth Circuit Court of Appeals that rejected the plaintiff’s attempt to expand insurance-agent liability under Michigan law. The plaintiff represented the estate of a man who died from injuries he sustained when a bounce house at…

CEF attorney David C. Anderson‘s Second Opinion Column entitled “Pyramid Scheme Leads to Professional Liability Claim” was published in the July 2015 issue of Claims Magazine/PropertyCasualty360.com (Vol. 63, No. 7). In this article, David recounts a trial where the jury was required to decide whether an attorney can be held liable when a client makes…

Collins Einhorn Farrell PC is pleased to announce that 11 attorneys have been named to the 2015 edition of Best Lawyers in America©. For over three decades, Best Lawyers® has been considered the definitive guide to legal excellence. Best Lawyers has since partnered with U.S. News®, the leading rankings publication in the U.S., to rank…

Collins Einhorn attorney David C. Anderson was recently elected vice-president of the Oakland County Bar Association. The OCBA is the largest voluntary bar association in Michigan, with over 3,000 members.

Collins Einhorn attorney David Anderson will be a featured speaker at the upcoming International Association of Defense Counsel’s Professional Liability Roundtable at NYU Law School on May 16, 2013. The topic for David’s panel discussion is: “When the Tripartite Relationship is Challenged by Coverage Issues.” The “tripartite relationship” is the relationship between the insurer, the…

David C. Anderson, on June 5, 2012, was elected to the officer position of Secretary of the Oakland County Bar Association (OCBA). With more than 3000 members, the OCBA is the largest voluntary bar association in Michigan.

The March 15, 2011 edition of DRI Riding the E O Line, Vol 3 Issue 1, featured an article written by CEFU attorneys David C. Anderson and Melissa E. Graves. The article focused on the use of social networking sites, such as Facebook, in discovery.

On March 25, 2011, David Anderson will co-host the Oakland County Bar Association’s Bench-Bar Conference. The focus of the conference will be social media as it relates to privacy issues in the practice of law.

David Anderson and Monika Sullivan obtained summary disposition on behalf of their lawyer client in the Wayne County Circuit Court. Plaintiff claimed that she was mentally incompetent and that her lawyers were negligent in failing to advise her not to enter into litigation funding agreements in connection with underlying automobile accident litigation. David and Monika…

On March 4, 2011, David Anderson and Monika Sullivan obtained summary disposition on behalf of their product manufacturing client in Wayne County Circuit Court. The trial court granted summary disposition on a claim that the garage entry and security system installed at an assisted living facility was negligently designed, manufactured and installed causing the plaintiff’s…

David C. Anderson has been appointed to a two-year term on the State Bar Character Fitness Committee (Division I). The Committee investigates the character and fitness of candidates for admission to the State Bar pursuant to Rule 15, Section 1, of the Supreme Court Rules concerning the State Bar of Michigan.

David C. Anderson won a products liability case in Wayne County Circuit Court, on behalf of a large food distributor, by using DNA testing to prove that the alleged contamination came from the plaintiff’s wife.

David C. Anderson and Monika L. Sullivan obtained summary disposition on behalf of an appraisal company that had been sued by a real estate development company for allegedly preparing a faulty appraisal of commercial real estate. Collins, Einhorn attorneys argued that the appraiser did not owe a legal duty to anyone other than the lender…

After a two week jury trial, David Anderson obtained a “no cause for action” verdict on April 8, 2009, in favor of his lawyer-client who was sued for legal malpractice, breach of fiduciary duty, breach of contract, and fraud. Plaintiff attorney’s original demand was $3 million, and he asked the jury to award nearly $1…